Winétt de Rokha is the pseudonym for Luisa Anabalon Sanderson (Santiago 1894, Ibidem 1951). I did not know her at all and I met her in my research on the Dream which, as you know by now, is my main topic for the year 2022. She is a Chilean poet whose figure has been overshadowed, as often happened, even if it happens less and less, from the companion of a life, also a poet, a certain Pablo de Rokha. This make me think of Sylvia Plath who had to deal with her husband's fame or Mary Shelley going even further back in time.

So I decided that it was necessary to dedicate to her a post on my blog to make her known at least to those who follow me or to those who land here even just by chance, but let's start from the beginning. Winétt, or better still, Luisa at the age of 21 published her first book of poems "What silence told me" and continued to write, subsequently publishing many collections of poetry. She was, like her partner, a militant of the Chilean Communist Party. In her work we find social themes and claims of an adequate role for women in the society of the time.

Oniromancy a book of dream poems

In 1943, at the dawn of a new world war, he published "Oniromancy" a collection that contains poems that refer to the theme of dreams, myth and fairy tales to create an almost oracular female code, a poetic voice to face the reality of a world dominated by male power. Fascism was in fact making its way into Europe. 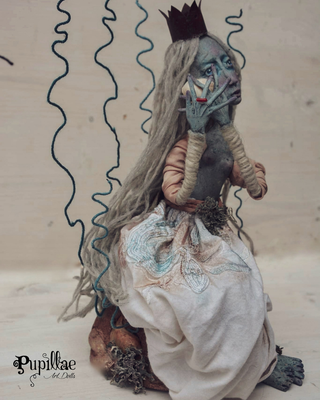 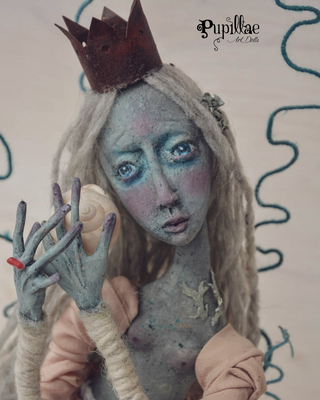 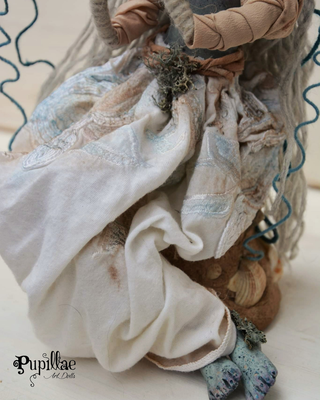 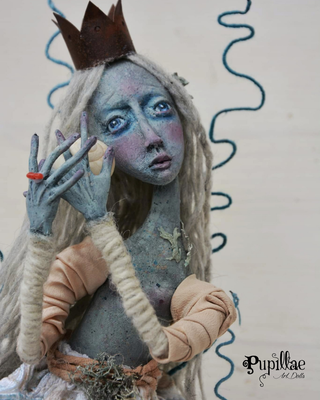 From Oniromancy I chose a poem entitled "The dream of algae" and I interpreted it through this art doll. I imagined a woman-queen, in the silent lapping of the sea floor, enclosed in this liquid peace that resembles a dream or a meditation, she can escape the brutality and madness of the surface and she can become herself a dream. I believe that with the times we are experiencing this theme is quite felt.

Here is the text of the poem, I translated it myself because I didn't find the poem in English so forgive me if it's not that good, even Winétt will forgive me I hope!

The dream of the Algae of Winétt de Rokha

In my coral fan the lost routes of the sea are painted,

in my coral fan.

Memories that sleep in mahogany chests,

comb their seaweed hair with a smoke comb,

engraved by a yellow goblin

who has inserted, in each tooth, a kiss of the dawn.

The beach is bright and the bare feet of the moon swell it gently.

The words of the sea rise with the tide:

The dream of algae, keeps a secret

written in seven pearls the color of a blue fable,

when women enter the silk of the ocean naked.

Do they look alike? 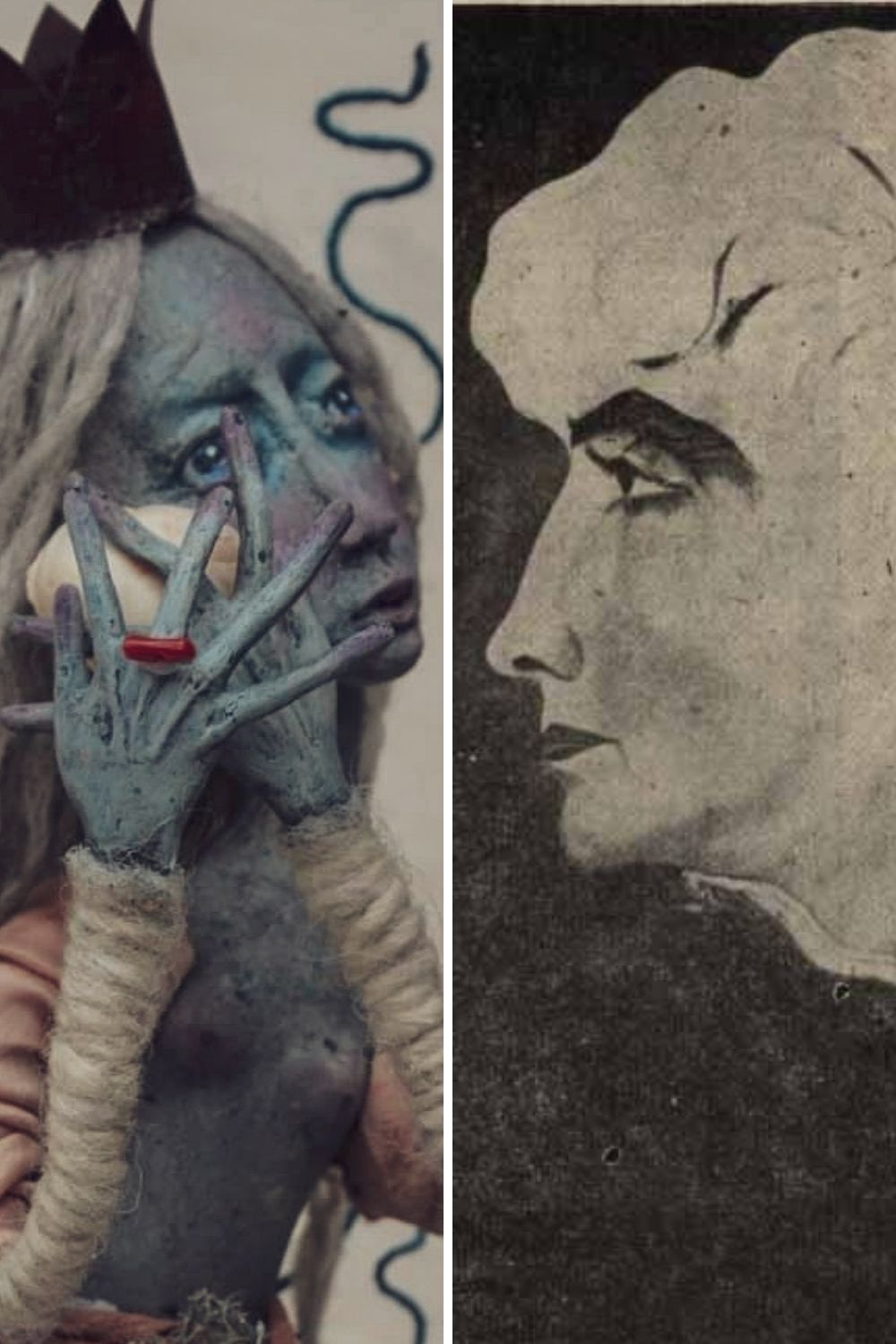 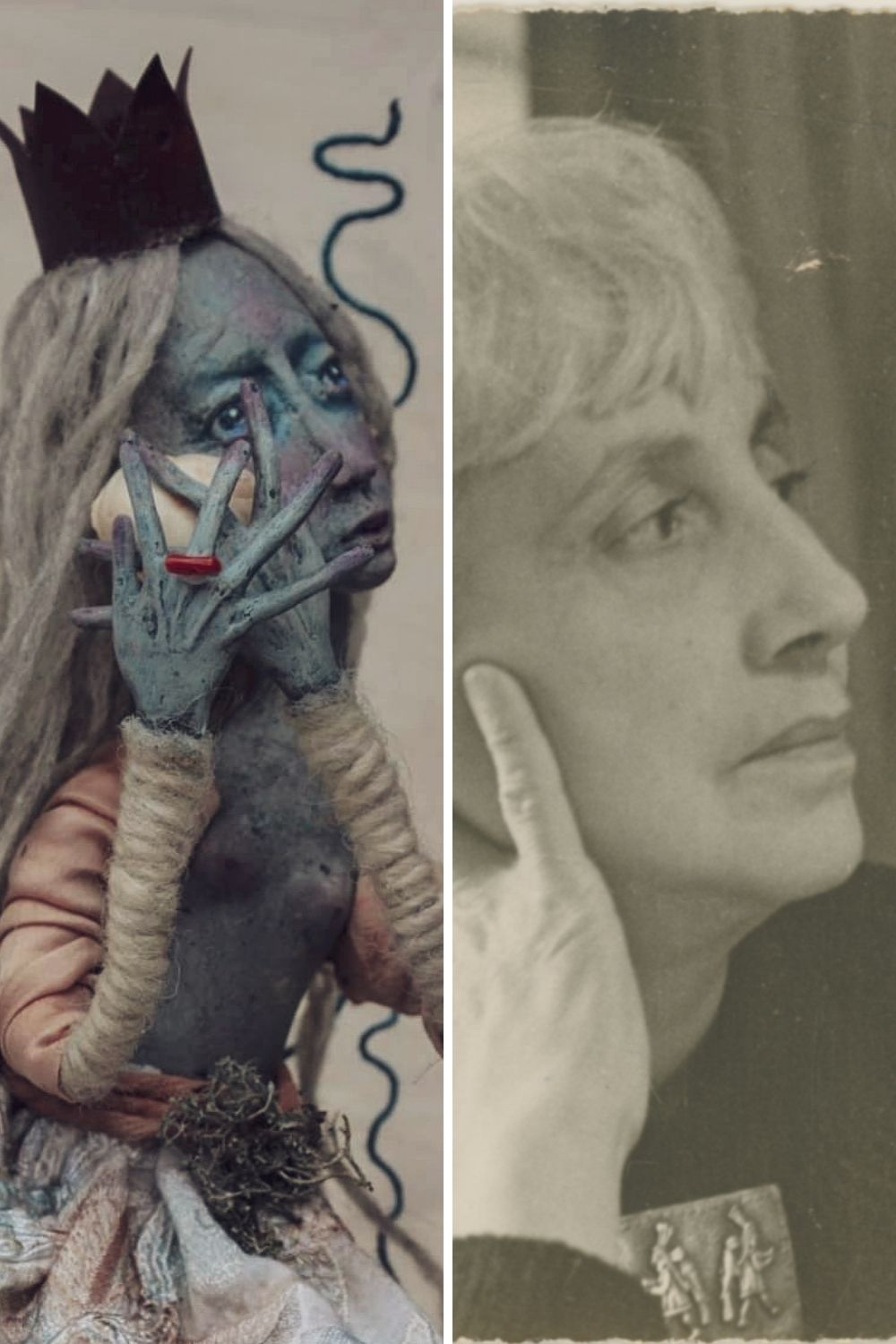 Winétt de Rokha was also unknown to me. When I read the poem, so evocative and full of images that materialized in my mind, I knew I had to interpret it with a doll. However, I didn't bother looking on the web what Winétt de Rokha looked like, this curiosity came to me only later, when I presented the finished work and I was quite impressed because I believe that my work has a lot of her in it.

What do you think?

Go to the shop to see more of the art doll inspired by the poem of Winétt the Rokha
tagPlaceholderTag: