The origin of Coraline's other mother.

This post is dedicated to lovers of Coraline like me. You probably know that the animated film is based on the beautiful book by Neil Gaiman but maybe you don't know that Neil Gaiman in writing this story was inspired by a late 19th century story called "The new mother" which inspired above all the character of "The other mother ".

This short story was written by Lucy Clifford and first published in her collection of children's stories "The Anyhow Stories, Moral and Otherwise". The story was one of those made to scare children and make them obedient.

The new mother, the story.

This story tells of two little girls, nicknamed Blue Eyes and Turkey, who live with their mother and a toddler while their father is at sea. The two girls meet another strange girl who tells them she has a little man and a little woman in a compartment hidden in the guitar that would only show up in the presence of naughty children.

The two girls, once at home, do everything to be naughty at the expense of the mother who warns them: if they continue to be naughty she will go with the child to join her father and replace her she will send "the new mother" with the tail of wood and glass eyes.

The girls do not believe in the threat of the mother but they meet again the girl with the guitar who tells them that they are not naughty enough to be able to see the little people and teaches them how to be more naughty, this is repeated several times until the girls they arrive home and find neither the mother nor the little sister. Frightened, they begin to clean the whole house to be forgiven by their mother, convinced that it is a joke and that the mother would be back.

They wait and wait until they hear a knock on the door and see the new mother with the wooden tail from the window and see her glass eyes sparkle, then they escape into the forest and it is said that they are still there and feeding on berries.

The doll inspired by the story. 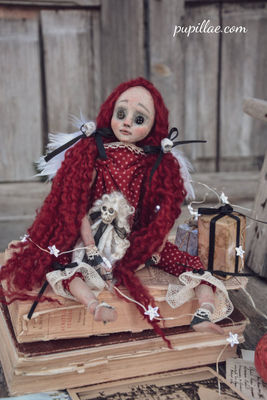 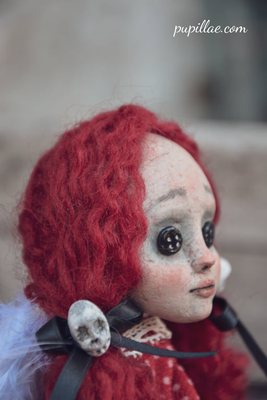 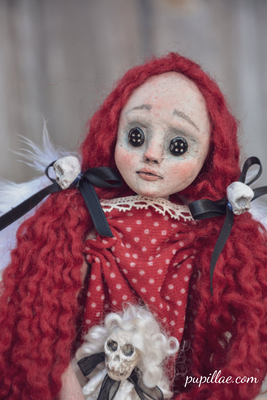 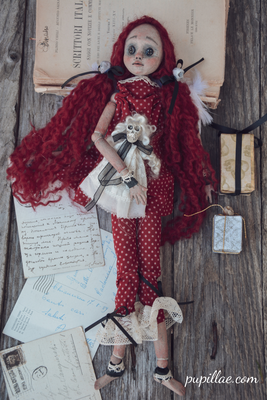 Quite terrible this story, right? The full version in English can be found HERE

I made a ball jointed doll in wood clay inspired by this story that I named Blue Eyes like one of the girls, I imagined that the girls stayed and spent Christmas with their new mother.

My Blue Eyes is now actually living with her new mother in Texas, a beautiful mother with no tail and amazing eyes!