Michelangelo Rossato and "The heart of Joan of Arc"

Born in the province of Venice in 1991, Michelangelo Rossato is an illustrator with an extraordinary sensitivity. I met him through his illustrations on Joan of Arc contained in the book "The heart of Joan of Arc", precisely during the research for the project "Small articulated encyclopedia of women in history" and while I was creating the doll inspired by Joan of Arc . I found out that he graduated in illustration from the Academy of Fine Arts with a thesis on the link between fairy tale and matriarchal society that I would love to read.

Michelangelo, how was your passion for illustration born? Is it something that has always accompanied you or did you choose this path at some point?
I think since I was a little boy: I have always had a very strong relationship with books. Before I could walk, I grabbed them and watched them for hours. My mom has always had a special eye for beautiful illustrations, or pushed me to illustrate those books that didn't have them (I still have a little book on which we have pasted the illustrations I made in the blanks). My father, on the other hand, always read me Greek myths. I think it is essential to feed children with beautiful literature, and my parents have always encouraged me to follow the heart and not the wallet even in the choice then in the course of study.
"The heart of Joan of Arc" struck me for the delicacy of the illustrations, your Giovanna shines, one would almost like to caress her. Where did you meet this character and what prompted you to deepen his story?
Six years before starting to design the book Joan appeared everywhere: in a song, in an old book found at the market. Then I read a small book by Michelet and was enchanted by her childhood, still steeped in pagan legends and rites. I started looking for her and studying her, initially I wanted to tell only about her childhood, but perhaps a niche book would come out.. Many advised me not to make a book about a saint, I tried not to listen to those voices. Instead I listened to her voice, Joan's true voice, whose words were transcribed during her sentencing process. These luminous words inspired the book, written in the first person, and guided me throughout its realization. It is the incredible story of a girl who unhinged the man / woman genders, who led an army when she was only 17, who was first burned and then sanctified by the church.
Some of your illustrated books like "The heart of Joan of Arc" and "Frida Kahlo in her Azul house" make me think that you are fascinated by female figures with a particular story, is that so?
I am fascinated by exciting stories, which make the soul vibrate. Because I believe it is necessary to educate boys and girls about emotions, even strong emotions. The taboo of this century is certainly spirituality, and I am speaking in a broad sense. It is forbidden to follow the heart, there is certainly a strong rationality, which has led us to sad epilogues. The stories that I love to tell have living and vibrant hearts as protagonists, souls that actually have no sex, tell about humanity made up of extraordinary men and women.
You have illustrated some of the most beautiful fairy tales, do you have a favorite fairy tale that you have not yet illustrated and would you like to?
My favorites were Snow White and the Little Mermaid, and I've already illustrated them by now! But I'm always looking for new fairy tales to fall in love with. Now I'm illustrating one to which I am very fond of, they say it is one of the oldest fairy tales in the world, the primeval fairy tale!
Behind your work I see a lot of research into both the history of the character and the colors, can you briefly describe the process that leads to the publication of an illustrated book? Is there a phase of your work that you are particularly passionate about?
When I propose a project to the publisher, it usually begins with falling in love. Some stories call you, they haunt you. After falling in love I start studying a lot, writing and at the same time making sketches and sketches. I usually work for at least a couple of months on the text, even if it can be modified until the very end. Then I start sorting out all the sketchy ideas in the storyboard, my favorite part. It is a real drawn script of the book: in making the storyboard, the actual book is designed, practically making a draft. When the text and the storyboard are ready, I begin to paint the final tables, the part arrives in which colors are chosen and often some atmospheres that before I could not yet see clearly. And so we proceed, with patience and good music, perhaps themed with illustrations! 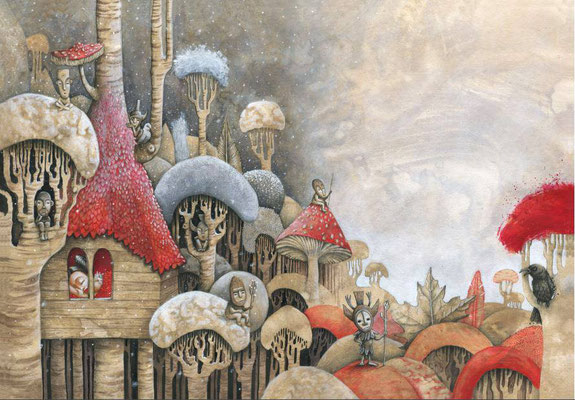 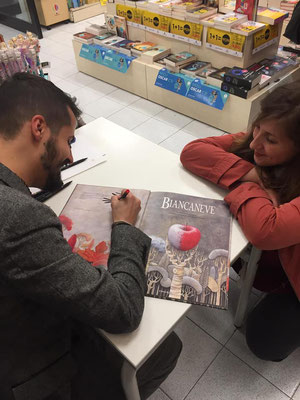 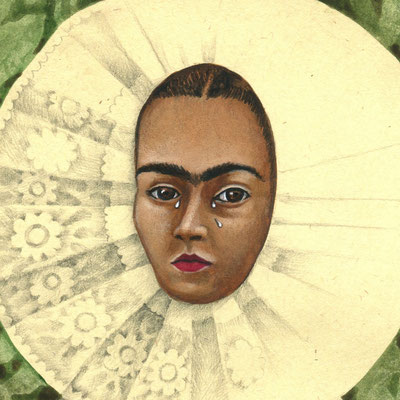 For those who are attracted to the art of illustration and would like to learn, do you also do teaching activities? Do you hold courses for newbies?
Yes, for several years I have been teaching at the Ars in Fabula illustration school in Macerata, at the Popolare di Borbiago University (VE) and since September I also hold private illustration and drawing lessons.
Can you tell us something about a future project?
I am working on a project of educational books on history and science that will be released in China in which I was also able to involve some of my talented students. And then I'm working on a fairy tale as I told you ... I've just started so I can't anticipate anything. I can only tell you that it is an ancient fairy tale, and that I will set it in a renaissance utopia .... futuristic!
Thank you Michelangelo, it was a pleasure and an honor!
You can meet Michelangelo's work here:
Facebook: Michelangelo Rossato Illustratore
Instagram: Michelangelo Rossato Illustratore
Sito: http://michelangelorossato.blogspot.com
nd Abuy his illustrated books in bookstores and even online
tagPlaceholderTag: